Trending
Search
HomeBe Fit
By Fit for Life on 11 March, 2014 Be Fit Success

There are great movies, and then there are life-changing movies: the kind that leave such a mark on us that we watch them over and over again, taking away something new each time.

I have several such movies in mind- the ones I’ll present here will make you stronger, more passionate; and ever more determined.

I do not have any particular ranking here- all are worth watching. So, this week, grab a copy and let the fun begin.

Made in 1977 by George Butler, who wasn’t rich enough to finance the distribution; Pumping Iron is the real deal for any legit two-scooper out there.

This is a fantastic movie about how bodybuilding was 30 years ago in the U.S. 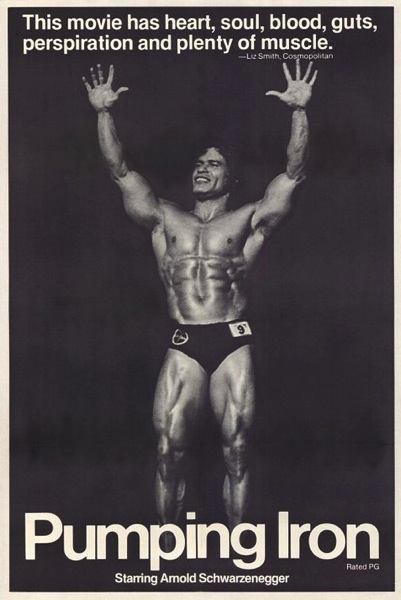 The movie is a docudrama- a genre that adds fictitious elements to a what would otherwise be a documentary. The main characters play most of the scenes, but viewers really feel as though they are assisting their competitions.

When the movie was first released, it did not achieve the success it deserved. Every movie about body building will remain poor copies of this masterpiece. As I put down my shaker at the end of the movie, I truly realized that these men were the real deal: 15 to 20 years of relentless effort in order to obtain the physique of a deity. 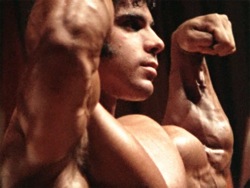 During the movie, we “attend” their training sessions; we get a good feel of the gyms’ atmosphere; hearing some bragging between Arnold and Lou. An oppressing patriarchal figure, an eccentric Arnold and Serge Nubret, better than ever.

I had some good laughs during the movies; other scenes left me daydreaming; but more importantly; the whole movie left me in awe of this huge work they all put their hearts into.

After watching this movie, you will probably be left thinking….mmmm “and what about me now?“…. your brain might start to feel some speed rushing into it; your muscles craving for more training.

My only critique is that the end, where we see the men joking about the event that just occurred, could have been better. The director should have added some fancy scripting or something.

If your boyfriend or girlfriend doesn’t understand why your shaker is a matter of life or death, sit them down and have them watch this movie with you.

All in all, you won’t learn any “secrets”, because they don’t really exist (except the anabolic candies), but you will definitely assist to the training of elite bodybuilders, who definitely bring this maniac sport to the level of a real masterpiece.

Once the movie finished; I had an extra shaker in order ensure I wouldn’t miss any gains.

This movie is another hell of a hit, because the protagonist’s journey is our journey. How does the average Joe, happy soaking donuts in his coffee, end up on stage? Is this impossible for you and me? Well guess what: no. But it does require some (huge) commitment,

A shitload of commitment. The director, who is also the main character (Stuart MacDonald), starts a challenge: 6 months to switch from an average physique to a stage-ready one.

Everyday, you follow Stuart’s progression as he is helped by the great Jeff Willet, a retired pro-bodybuilder who promised himself to help Stuart from start to posing. This. This is the real deal.

As the weeks pass, we watch as Stuart evolves, and making many sacrifices in the name of his goal (he is greedy by nature- something that drives him crazy sometimes). Not only do fatigue and cravings take their toll on him, at times he’s also depressed and left feeling hopeless. But Stuart is really determined to prove we have to dream big, and do everything in our power to have these come true.

Hats off to his determination and commitment which are more than admirable. Once he’s on stage, we are happy for him, for it’s a well-deserved moment of glory.

Because I myself have experienced single-digit body fat, I can confirm that this is no walk in the park. From tiredness to feeling moody,  irritation and wacky hormonal activity- this is not easy; but it pays off.

This is a rare, no-BS documentary; it really shows us the hard work (I’m not talking about some Photoshop transformation) in order to achieve that perfect physique. It also gives us tons of information about what it’s really like to prepare a show…

Once the movie finished; I put down my shaker and started doing some push ups…

Another docudrama, who’s realization is quite original and that features great filming. The movie here praises Max Gerson (1891-1959), and his institute.

During the movie, we learn very interesting facts about the lobbying and economic imperatives against one’s optimal health. I will not due justice to this movie by explaining it, so I invite you to watch it.

The Beautiful Truth teaches us that what we read or learn is not always true. This movie still remains timely, because nowadays, we are not sure about what is good for our health and what is not; what we should eat and what we shouldn’t eat…This maze is one created for economic reasons, and is kept alive for the benefit of the food industry (gluten, aspartame, etc…).

In our societies, diets are a consumption fashion (meaning they are often linked to some marketing jive).

Max’s daughter, Charlotte, ensures his legacy. It is hard not to shed a tear (ok, I shed a tear) when this exceptional woman explains her fight and how her message is a real vehicle for hope.

This movie showed me that everything is not only just about science; other aspects (power of conviction to outrun some observations and diagnosis, for example) play a big role in our health. Speaking of which, I invite you to read more about Kervran’s Theory, regarding biological transmutation. Biological transmutation, if proven true, would be a real bomb for life sciences!.

Watch it, and spread the word; especially to those who seem to eat up the food industry’s pre-made discourses.

Once the movie finished, I finished my shaker and ate some veggies.

Pain And Gain is first and foremost based on a real life story, which is crazy. Mark Wahlberg, Dwayne Johnson and Anthony Mackie form here a brutal trio looking for more action in their lives. Daniel Lugo, coach and trainer, is frustrated by his average life, and he feels ready for some kick ass action. Assisted by his two fellow gym-mates, he comes up with a plan (well not sure we could call it such)  to bring in some money. 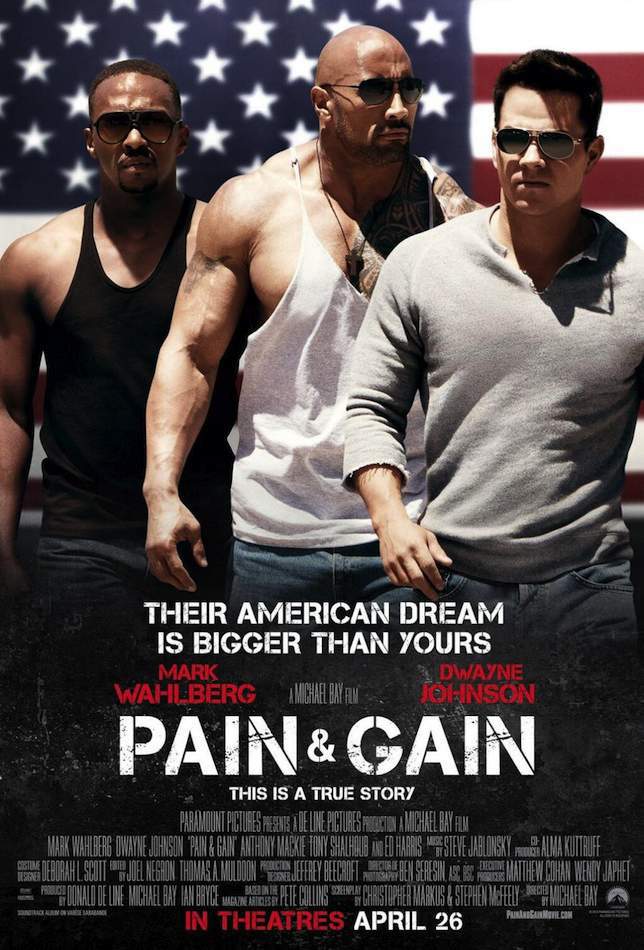 I was convinced this movie would be a bad block buster advocating muscles, big cars, money; but it’s a great comedy… We even end up having some sympathy for Daniel Lugo- his frustration only equals his ability to make things move forward. Some scenes are really funny; and I had a great time. It’s a good action movie that doesn’t suffer from long and boring scenes, and we’re never sure about what will happen next.

Actors are of courses loaded like horses, and their mindsets don’t really end the clichés about bodybuilders who are as dumb as they are big, and who’s brains will always be lighter than their biceps. But the director did a good job with this atypical anti-hero.

Surprisingly, the comedic scenes were not what I really remembered about this movie; it was Daniel’s motivation and determination in reaching his goal that really left an impact.

I think many of us do feel the urge to “be someone”. It is this feeling that pushes Daniel to violence and comical action plans. I personally pitied him, because the director really managed to touch deeply on Daniel’s feelings.

The message I took away from this movie? Although Daniel takes it a bit too far, taking action is important and is something we must do if we want to change our lives.

One the movie ended; between two shakers, I came up with a plan to rob the old lady next door….

If you have some good recommendations; let me know and I’ll update the list.