This is the second part of our 3 parts serie about macronutrients (read the first part about proteins here).

Lipids are fatty acids, composed by an hydrocarbonated chain (with different lengths) and ended by a carboxyle group: 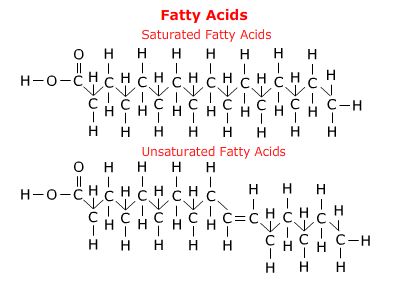 Carbone bonds can either be saturated or unsaturated

Here are the fatty acids we usually consume :

Fatty acids are usually stored as triglycerides within the fat cells (adipocytes), which are the main source of fat.
Triglyrecides are called such because they contain three fatty acid molecules, bond together by their carboxyle group to the hydroxyl groups of a glycerol molecule : 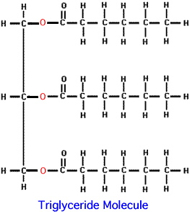 Lipids, being hydrophobic (they do not dissolve into water), are being transported within the bloodstream by protein structures called apolipoproteins – the gathering is called lipoproteins.

Lipoproteins, depending on their density (amount of apolipoproteins, cholesterol and lipids), could be classified in 5 categories :

The more a lipoprotein contains triglycerides the less it is dense, and vice versa, the more it contains apoproteins, the more dense it is.

All the lipoproteins contain : 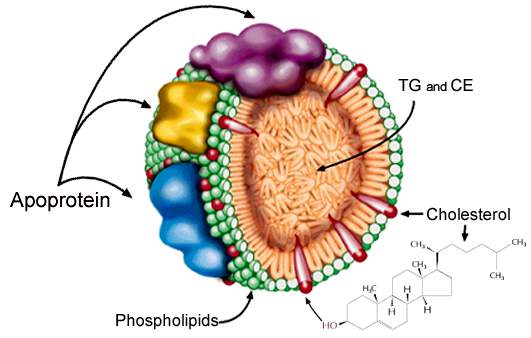 The chylomicrons are formed within the small intestine, and they  mainly carry triglycerides (being synthesized from dietary fatty acids) and a small amount of cholesterol. 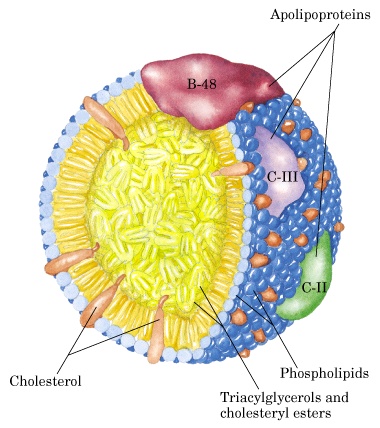 They first circulate within the lymphatic stream, the blood stream. Once they reach the plasma, the triglycerides are hydrolyzed by the lipoprotein lipase (an enzyme that catalyzes the fats) – making those fatty acids available for the peripheral tissues OR they are drained by the adipocytes where they are converted back to triglycerides.
The more the hydrolyze moves on, the more the chylomicrons shrink; while their excess material is being transferred to the High density lipoproteins that move around.

In the end of the process, the only thing that is left are remnant chylomicrons, which contain less triglycerides than cholesterol. Those are destroyed within the liver.
Chylomicrons move into the blood stream around one hour after a meal, and disappear after 8 to 12 hours.

The dietary fat bring around one quarter of the moving cholesterol, the rest being synthesized by :

Cholesterol is able to regulate itself when it comes to its synthesis its intracellular penetration : an excess limits the inner production, when the circulating levels are stables

Because the cholesterol in excess cannot be degraded by the tissues, the moving HDL drain it from the peripheral cells, in order to constitute what we call “HDL-2” (High Density Lipoproteins, cholesterol rich). These HDL bond on hepatic receptors, and are catabolized ; this is the cholesterol that is used for the biliary acid synthesis

What are lipids used for?

Lipids are a very rich energy source for he body : their oxidation provides around 9,4 kcal per gram. When fat is stored as triglycerides within the adipocytes, the storage cost is amazing – the storage process uses around 2 to 3% tops – that means an average joe is able to carry around 100 000 kcal (!)
Neo Lipogenesis (which is the fatty acids synthesis from glucose or amino acids) rarely occurs, it’s only the dietary fatty acids which are stored within the adipocytes.
In excess, a neo lipogenesis ~might~ occur, but the process being much costly, that doesn’t usually happen (around 20% of the energy is used for the conversion).

Lipidic stores are mainly used by the muscles, the liver and the myocarde (which is the heart tissue), and contrary to the glucose, fatty acids oxydation doesn’t happen after dietary fat consumption – insulin inhibits lipolysis, and stimulates lipogenesis

Mitochondrial membranes are also rich in polyunsaturated fatty acids, while the omega 3 seem to play an important role in the proteins involved with the electrons transportation performance; free radicals, made by electrons leaks, can occurs with defectuous membranes.

The brain is the organ where polyunsaturated fatty acids are the most abundant : 60% of the phospholipids are composed of Arachidonic and Docosahexaenoic acid (DHA).

During the pregnancy period, the child’s brain requires important quantities of Docosahexaenoic acid, and the mother would likely to suffer from deficiencies of DHA during such period – and that might explain the postnatal depression (studies are still in progress). The mother’s milk should ideally be also high in omega 3 polyunsaturated fatty acids ; and this can only be achieved done by having dietary fats high in Alpha-linolenic and polyunsaturated fatty acids (EPA and DHA)

It is recommended to consume around 3 grams per day of polyunsaturated fatty acids – that gives around 10 grams of omega 3 oils, such as Olive or Colza oil and around 400g per week of fatty fishes (mackerel, tuna, salmon, etc….)

Some other interesting studies have discovered a link between breast cancers, prostate cancers (“crossed cancers”) and an unbalanced omega 3/omega 6 ratio. 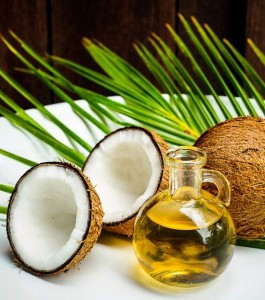 On a daily basis, men consume around 20 different fatty acids from both animal and vegetal sources, some though are fragile: sun/ light/ air could change their composition.

The most exposed are the long-chain polyunsaturated fatty acids; some of them are also purposely altered in order to update the thermal resistance of the fatty bodies.

Make sure not to expose polyunsaturated oils to light and air. Olive oil contains chlorophyll, making this last even more sensible to light.
Truth is… every oil oxidizes in one or other way. For instance, a closed bottle of oil would go from 50 mcg to 500 mcg in six months only !

Not to mention that self-oxidation is increased when the fatty bodies met air/ light; and even more when the air volume within the bottle increases by its usage.
That wouldn’t even surprise me that olive bottles in outdoor restaurants are unfit for human consumption…

When the temperature increases for polyunsaturated fatty acids, some compounds that ca provoke cancers develop : ketonic bodies, alcanes and lactones

Based on the fatty acids repartition, the most resisting to high temperatures fats are :

The cooking of those fats can be enhanced by adding several foods. For instance, by adding oinions, you prevent lipoperoxydation (thanks to their antioxidant properties).
Nevertheless, it is always a bad idea to cook oils at high temperatures, and both fried and fumed oils are unfit for human consumption. For instance: the oil used for french fries, when left to ambient air, becomes unfit after 4 or 5 usages only.

Under 180°, sunflower, soya, and colza oils keep their properties – but even if those oils can be warmed, they cannot be fried if you want to prevent their lipoperoxydation. Nut oil can only be used for uncooked preparations.

In order to make margarine, a mix of different fatty acids is used : oils, concrete fats (solid at a temperature on which oils are not). The oils being used are :

As for the solid fats, they could either come from copra (coconuts), palm oil, and even sometimes animals suet (lard).

The solid state and the resistance to high temperatures would be impossible without a “solidification” process : an this is the hydrogenation the food industry uses. 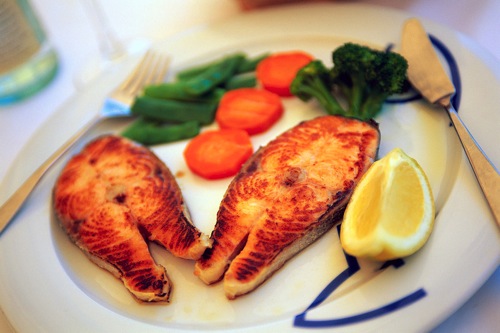 The only interesting thing about margarine made from sunflower oil though, is that its consumption is made possible even at high temperature (since it contains more saturated acids) – while in its main form, it is not.

The same approach applies for olive-based margarines – hydrogenation lowers the monounsaturated rate from 75 to 35%.

The trans fat are fats for which the molecules are converted to solid molecules. The trans fat change the prostaglandin synthesis ( More reading here : http://www.nahanniriverherbs.com/94,201)

And even if the food industry claims that some fat may contain less than 2% of trans fats, some bad-quality margarines can contain up to 20% of trans fat – the very same fat used for chips, biscuits, bakeries, etc…)

Picking the right margarine will end up to be a real sport!… due to polyunsaturated/ unsaturated/ saturated alteration and omega3/6 ratio.

In order to sum-up, here are some advices you would give/ apply to yourself: